So last week after my wrapup of barbecues in Austin, Texas, I was moping all week knowing it’d be a while before I was returning to the states and would have no way to satisfy my brisket loving soul. And then Bovine & Swine Barbecue opened and I knew it was a sign from above!

Bovine & Swine Barbecue opened last week with Wes Griffiths (hillbillycue) and Anton Hughes (texinvoice) &#8211; former pit masters from Vic’s Meat Market &#8211; along with Tim Chillingworth. Although it’s barely been open for a few days, the place is already pumping when we arrive at 6pm. It’s been a massive hit already with locals, bringing in their family to eat-in or ordering their barbecue takeaway. 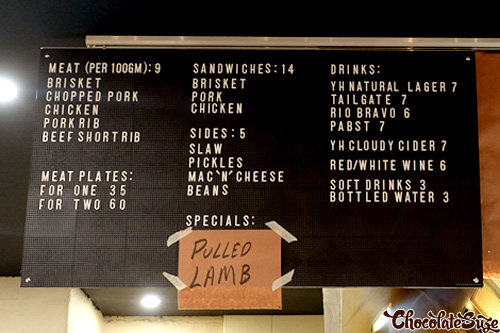 I ordered the Meat Platter for Two ($60) which comes with your choice of 3 meats (I chose the brisket, beef rib and the chopped pork) and sides. Aaand because I was feeling ambitious I also got 100g of the pulled lamb ($9) and 100g of the chicken ($9).

The brisket here is the stuff of dreams I tell ya! That smokiness, that flavour, that happiness and all is right with the world. The beautiful striations of fat throughout the meat was like a flavour explosion and everything and everyone just melted away and all I could think of was how much more of the brisket I could steal from Noods before he realised what I was doing&#8230;

The special of the day was pulled lamb and it was lick your lips spectacular with caramelised edges, fattylicious nubbins and juicy meat.

The chopped pork is equally incredible, and much better than the bland pulled pork you can get at any pub these days.

The chicken was lean and not as juicy but woah the smoky flavour was the bomb! I just wanted to bury my face into the chicken and inhale it so it would be ingrained into every fibre of my being.

Last but not least is the beef short rib. Woah nelly my heart is bursting with happiness just thinking about that rib! The meat was unctuously soft with a layer of creamy meat hiding under that perfect layer of bark. The brisket and this beef rib would definitely be chosen for my last supper.

And then there was the sides which were pretty generous serving sizes! The mac & cheese is creamy, cheesy and perfect; the coleslaw gave us relief when we started to get the meat sweats and cut through all the protein and fat we’d consumed and the beans were strangely super comforting. Oh and not forgetting the house made pickles and a whole pile of potato crisps!

Sadly they were out of pork ribs, not that I needed it, but it does give me a reason to return asap! Meat lovers rejoice, Bovine and Swine Barbecue is where it’s at!

I am Susan Thye. Aka ChocolateSuze. Sydney, Australia. Gemini. Married to Noods. This is a food and lifestyle blog. I like cheeseburgers, cake, bacon and fried chicken.
Email: susan@chocolatesuze.com Instagram/Twitter/Snapchat: @chocolatesuze