OH HAI! Yes it’s that time of year again folks! It was Adriano Zumbo’s birthday on Nov 6th and, like last year, all desserts at the patisserie (296 Darling St, Balmain) were macarons! 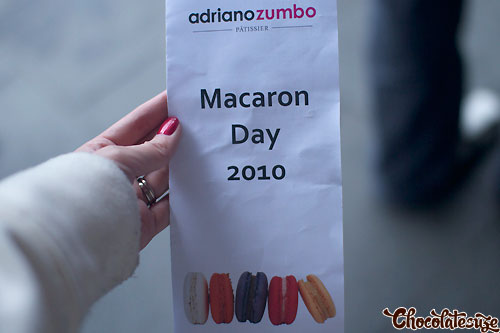 There were 66 flavours of macarons (macarons with ONE o!) and luckily there were heaps of leaflets being handed out on the day so we could peruse the macaron menu and mark off what we wanted to order

The awesome Phuoc drove me bright and early to Balmain in the crazy pouring rain. We stopped by the factory/cafe (114 Terry St, Rozelle) first so I could get a squizz at the new digs but left soon after realising they didn’t have the full range of macarons there.

We managed to step into every single puddle possible while crossing the street to be faced with this queue. The shop had been open since 7.30am and after spotting Jacq and Dan in the queue we waited about an hour before reaching the promised land of macarons. There were camera crews aplenty and an expectant buzz in the air as the queue inched forwards before&#8230;

MORE BABIES! Just as we were about to enter the promised land we spot Sook who had bought some of the pre-packed assorted boxes in hopes of securing the &#8216;Golden Macaron’ to win a day in the Zumbo Lab. And the lucky bugger found TWO!

There were some pretty crazy flavours available- blood & chocolate, salmon and toothpaste were some of the weirder ones. Sadly the fish and chips macaron hadn’t arrived yet when we arrived but I’m sure other bloggers will write about em.

The macs were in alphabetical order and displayed in much prettier plastic cases. Ordering the macarons was a pretty pain-free experience compared to last year, all we had to do was hand over our leaflet with our selections and we were in and out within 5mins.

Just as we were finishing up our order a huge tray of big macarons appear. BIG MACS! How could we NOT have one!? I skipped the green mac cos I have issues with basil that’s not combined with cheese, the pink cos I have issues with rose that is in a form other than a flower and gleefully ordered the beyootiful passionfruit and raspberry macaron.

[Image from Gourmantic] We left the land of happiness to be greeted by this cute lil doggy hehehe Helen spotted this pic over at Gourmantic ahahaha this pic cracks me up so much! I was reaching into my bag for my camera and just as I got it out he sat back down!

So bright! So vivid!

Of course as soon as I saw the salted butter popcorn macaron I knew I had to stock up. I’m kinda wishing I bought more&#8230;

Other flavours that I got l-r: popcorn, salt & vinegar, redskins, cereal box, burnt toast, hamburger, cookie dough, salted butter caramel, milo, peanut butter & jelly, pistachio. Super ♥ for the redskins mac! Zomg it was so awesome and was sad I didn’t get more than one of those babies! Wasn’t a huge fan of the salt & vinegar cos I wanted more of a salt flavour instead of being hit by a truckload of vinegar. The pb&j was tasty with the jelly cube in the centre nice and squishy tho I think a better combo would be pb+choc.

Hello innards shot! Check out that knob of butter on the burnt toast mac oh yes it was deeeelicious. The hamburger was weird but I think I preferred it more with the tiny sliver of beetroot than the pickle in last year’s cheeseburger mac. Next year I’m totes hoping there’s gonna be a cornflakes macaron!

I am Susan Thye. Aka ChocolateSuze. Sydney, Australia. This is a food and lifestyle blog. I like cheeseburgers, cake, bacon and fried chicken.
Email: susan@chocolatesuze.com Instagram/Twitter/TikTok: @chocolatesuze

This error message is only visible to WordPress admins

Please go to the Instagram Feed settings page to create a feed.